Knowsley Community College held the launch of its new Princess Drive Campus in Huyton to showcase how their curriculum’s programmes prepare young people for industry.

Greeting more than a thousand guests over the day was the Bloodhound Supersonic Car, which is shortly aiming to break the land speed record and travel at 1000mph.

An enthused Steve Logan, principal of Knowsley Community College commented on how valuable the launch was to all that participated.

“Our event was an opportunity to highlight a fantastic example of the UK’s ability to be at the forefront of technology and science and we want to inspire young people to ‘think big’ and have an impact on the country and the world. We hired a marque big enough to hold the 14 metre long Bloodhound car which enticed a record turnout from more than100 local employers and stakeholders including head teachers and community representatives.” 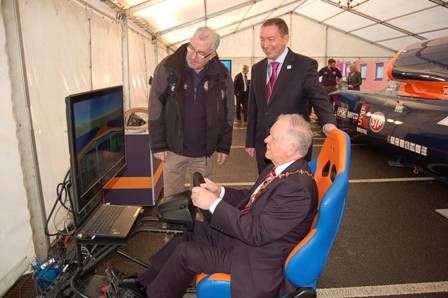 In addition, more than 400 local schoolchildren from primary and secondary schools attended plus more than 500 guests from the local community all of whom were given a tour of the campus. Many also took part in a range of ‘Have a Go’ STEM sessions on the day.

Mr. Logan added: “It was a delight to host the Bloodhound Supersonic car. Our state of the art facilities, coupled with the very high standards of teaching and support in the College, mean that young people are now well equipped with the skills, qualifications and behaviours to enter and have successful careers in the engineering and construction industries. This is a great facility for Knowsley too. By hosting the Bloodhound Supersonic car at our official opening, it’s been a great opportunity for hundreds of local employers, school children and members of the community to witness what Knowsley Community College is offering.” ends