A groundbreaking music education scheme for pupils in Liverpool is to continue its launch this week after months of planning.

Resonate Music Studios is a unique band, choir and ensemble programme engaging pupils from across North & South Liverpool in weekly rehearsals to support their interest as young musicians. The Studios, based at Gateacre School and Resonate Hub, Notre Dame Catholic College, will provide Liverpool’s young people with the musical support and resources to engage and inspire them whatever their musical interests and skills may be.

There are over 8000 students learning an instrument through the instrumental programmes Resonate delivers in schools. Resonate Music Studios will offer Liverpool’s young people the musical environment to further their interests in music. 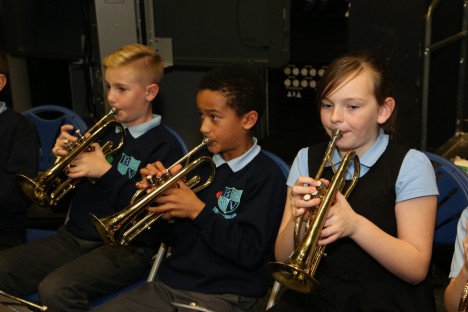 Resonate has collaborated with John McHugh, Director of Arts at Notre Dame Catholic College who has written a series of new compositions for a new beginner ensemble called the ‘Let’s Play’ project.

“Resonate Music Studios will host a variety of bands and ensembles including a brand new beginners ensemble – ‘Let’s Play’ which is an exciting, free initiative for the whole of the city and unique to Liverpool.

“‘Let’s Play’ is aimed at beginner musicians on any instrument – guitars to flutes, euphoniums to ukuleles, violins to percussion, if you have an instrument come and join in. Any pupil who can play a few notes on their instrument can join the ‘Let’s Play’ band. Also, as part of ‘Let’s Play’, advancing young musicians will be encouraged to act as mentors to their younger peers too. There really is something for everyone.”

Each Resonate Music Studio centre will host a Let’s Play band, a Resonate Singers and a variety of bands and ensembles for advancing young musicians to access.

Mr Dickson added: “We’ve already seen through Resonate Singers what learning in a group does for the confidence of young people. This was highlighted earlier this year when they supported Gary Barlow at the Echo Arena, an amazing experience that will stay with our young people for their entire lives.”

“There are many young musicians in Liverpool who may have been playing for quite a while and would like to have a go at playing in one of our advancing ensembles, they may wish to set up a rock band or have a go at playing jazz. For these advancing music students we will host a selection of ensembles focused on Rock Rehearsals, Jazz, a Brass Band a Wind band, a training orchestra and Resonate Orchestra.”

Resonate Music Studios will be in the form of weekly sessions initially held over the next few weeks in the run up to Christmas at Gateacre School and Resonate Music Hub, Notre Dame Catholic College on a Wednesday and Thursday respectively.

Schools and parents are being asked to contact Louise Hough on 0151 235 1640 for further details and to register.
Mr. Dickson concluded: “Music has such an empowering effect on the personal development of a child and our principle aim is to nurture as many pupils from as many different backgrounds and circumstances as we can in this city. We’ve already been inundated from parents and community stakeholders including local MPs who are as excited as we are about the programme!”

A grand launch is currently being planned for January 2015.