A local Skelmersdale firm has uncovered what it believes is a mis-selling scandal on a mass scale after vulnerable consumers in Southport and surrounding areas reported that their homes had become damp and mouldy following the injection of insulation material into their cavity walls.

Cavity Claims North West maintain that they have already unveiled hundreds of cases of people whose homes have been blighted by this ill-advised practice.

“There seems to be a pattern in the vast majority of these cases in the way that cavity wall insulation has been presented to people with doorstepping and cold calling salesman describing this as being government-backed or funded. This is not the case,” said Cavity Claims’ operational support specialist Mark Harrison.

“The process is almost always funded by one of the major energy suppliers who have been given targets by the Government to insulate homes, and if they miss those targets, they can be fined by the energy regulator Ofgem so there is pressure to install as much cavity wall insulation as possible.

“Even though this has arisen via government policy, it is neither controlled nor overseen by the Government so now that things have gone horribly wrong with potentially thousands of homes in Southport affected, the Government can deny responsibility.

“Another pattern that all cases appear to have in common is the role of the Cavity Insulation Guarantee Agency (CIGA), which issues 25-year guarantees. We. have been told that salesman have been describing these as “Government guarantees”, which they are not.

“Seven of CIGA’s 11 current directors are also directors of firms that either make or install insulation, or of trade associations that represent the interests of installers.

“We are not surprised that CIGA has done its best to deny the installer’s or its own responsibility when approached.”

“We have also been helping many householders like for example, Mrs. Navin from Crossens who complained of dampness following a cavity wall insulation. She said: “I’m really upset about the whole episode. My main concern is how other families also on a low income like us will become victims given that most of the general public won’t have any expertise in what is being sold to them. Ultimately, I now have extreme damp and wet walls in my house following the completely inappropriate works undertaken. It has also exacerbated my disability. I’m determined to tell as many others to be very mindful of any firms offering this service.”

Many others have been told that chronic damp issues could not possibly be a result of the insulation. Instead, they were fed stories such as pre-existing building defects must be to blame.

Mrs. Navin added: “I now know through Cavity Claims Northwest who have been very helpful that the installer is supposed to have carried out a thorough pre-works survey to spot any such defects. This didn’t happen with me or hundreds of other cases so I’m told. It’s a disgrace.” 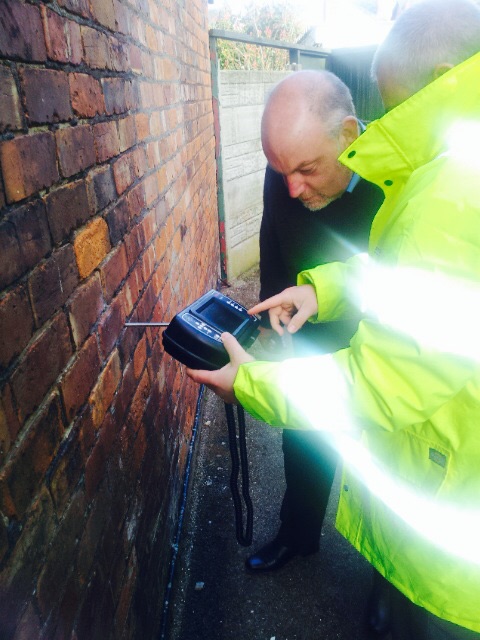 Another angry and frustrated resident from Southport, Neil Hanson (Pictured left) said: “I’ve had exactly the same experience as Mrs. Navin and what is even more galling in all of this is that there are lots of other cases out there with no complaint procedure in place. I was even told of one case in another part of the country where an installer had blocked the chimney flue in carrying out an inappropriate cavity wall insulation resulting in a householder’s death.”

Mr. Harrison added: “We believe cavity wall insulation problems are vastly under-reported, and that many more will come to light in the coming months. Most dampness issues won’t show up in the first few weeks following installation and it can two or three winters before they emerge.

“What will also be of major concern to people is that we know of two houses recently valued, one of which was reduced by £15,000 because of damp and other issues directly related to the cavity wall insulation. The other was a property reduced by £23,000 because the insulation was installed 6 years ago, the house has mould, requires decorating throughout as it is damp and the entire floor needs plastering with all wooden floorboards having rotted on the ground floor…sadly, we expect to see more and more incidences of this.”

Those worried about their cavity wall insulation are advised to contact Cavity Claims North West immediately on 01695 559 767. www.cavityclaimsnorthwest.co.uk