Host, Liverpool’s original Pan Asian restaurant and bar concept in Hope Street held a night with The Liverpool Craft Beer Company dedicated to demonstrating craft beer as the perfect accompaniment to Pan-Asian food. Following discussions with the Love Lane Liverpool City Centre-based business, Host will now be collaborating on a series of similar events beginning in the new year. 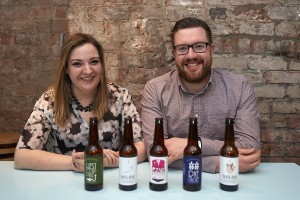 The Liverpool Craft Beer Company’s Jess Doyle pictured left said: “For a long time now, people have thought that the only drink to have with your meal is wine, but now, with craft beer becoming more and more popular and breweries, such as our own, producing high quality craft beer, people are starting to realise there’s more to beer than bland fizzy lager.

Beer styles have a wide spectrum of flavours, aromas, colours and textures which means that there really is a beer for every meal. Five of our beers have been expertly paired with the incredible food at HOST with the chefs tasting the beers as they created each dish. Our first night was a great showcase of just how well quality beers and food can be paired together.”

Host’s Jonny Russell said: “Jess and Terry from Liverpool Craft Beer were on hand to talk our guests through the beers and answer any questions. The beers served included Rye Pale Ale, West Cost Pale, Pzyk Diablo, White Bear and Black Bear. Our head chef Keith naturally had to taste test each beer in matching the dishes, he promised a good night and it was!”